In the following letter Jan Patočka thanks the former director of the Husserl-Archives, Samuel Ijsseling, for sending him copies of “Die Welt des Menschen – die Welt der Philosophie” (Phaenomenologica 72).

Patočka writes a few weeks before his death: 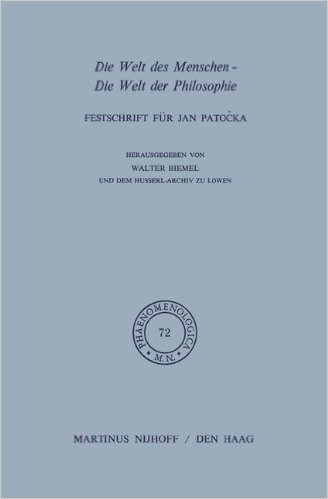 “The theme of the 1958 meeting at Royaumont was the nature of analytic philosophy. The impressive list of speakers included Gilbert Ryle, J. L. Austin, P. F. Strawson, W. V. O. Quine, Bernard Williams, J. O. Urmson and R. M. Hare; and in the audience were A. J. Ayer, Charles Taylor, and continental philosophers such as JeanWahl, MauriceMerleau-Ponty and H. L.VanBreda, the founder of the Husserl-Archives in Leuven. It was hoped that this conference would lead to mutual understanding between Anglo-American philosophy, in particular ordinary language philosophy, and continental European philosophy, in particular phenomenology. The meeting was no success. In the words of someone who attended it, the conference was ‘a dialogue that didn’t come off . . . [F]ew left it much wiser than they came – at least as far as the subject of the conference wasconcerned’ (Taylor 1964, 132–3).” (See Søren Overgaard, (2010) ‘Royaumont Revisited’, British Journal for the History of Philosophy, 18: 5, 899—924.) 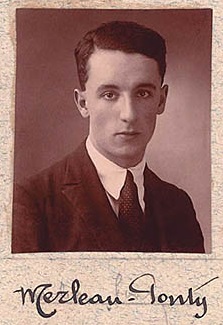 In March 1939 Merleau-Ponty wrote a letter to Pater Van Breda (the following translation of the letter and the whole story about Merleau-Ponty’s visits can be found in: H-L. Van Breda, “Merleau-Ponty and the Husserl-Archives at Louvain”):

Monday, March 20 <1939>…
Sir,
On the advice of Mr. Jean Hering, I am taking the liberty to request some information about the Nachlass of Husserl. Excuse me for forcing upon you the inconvenience of a response.
I am currently pursuing a study of the “Phenomenology of Perception” for which it would be extremely useful for me to acquaint myself with volume II of the Ideen. There was, I believe, a typed copied that Husserl’s students used to consult. Does this copy still exist, and do you think I would be able to consult it in Louvain? If you require letters of introduction from Prof. Brunschvicg or from another professor I would be very much obliged if you would notify me.
Allow me to ask you whether Fink’s work, a fragment of which just appeared in the “Revue internationale de philosophie” is to be published soon in Belgium.
Finally, I have been unable to procure a copy of Husserl’s posthumous work <Erfahrung und Urteil> published by Landgrebe at the Academia Verlag in Prague. I don’t expect to receive a response directly from Prague. I wonder if it is available in Belgium? (I haven’t seen it anywhere in Paris.) I would be very grateful if you could tell me if it is. I am all the more eager to read it since Prof. Koyré has entrusted me with an article for the homage to Husserl upcoming in “Recherches philosophiques” …
Yours truly,
<signed> Maurice Merleau-Ponty
Charge d’enseignement, Ecole normale superieure

At the end of the 1940s, Van Breda managed to enlist the support of philosophers from all over the world in order to apply for long-term financial aid from the international organization UNESCO. Merleau-Ponty, Katz, Buytendijk, Gurwitsch, Plessner, Berger, Ricoeur, Schütz, Landgrebe, Fink, Ingarden and many others sent recommendation letters to the UNESCO (see below the part of David Katz’s letter to the UNESCO).

– As a result of the successful application in 1950 the first Husserliana volume („Cartesianische Meditationen“) was published with the financial support of the UNESCO.

In spring 1971 Eugen Fink and Ludwig Landgrebe – the former assistants of Husserl – received an honorary doctorate from the University of Leuven. This was not only in recognition of their academic work, but also in consideration of their exceptional commitment to the establishment of the Husserl-Archives.

From the very beginning, pater Van Breda gave researchers unhindered access to all the documents in the Archives. To this day, the Husserl-Archives in Leuven remain faithful to what Van Breda once called its “unrestrictive ‘open door policy’.”

In 1944 the Vietnamese philosopher Tran Duc Thao (1917-1993) of the École normale supérieure, visited the Husserl-Archives. His research, focusing on Husserl’s development of the phenomenological method and the connected concept of lifeworld, later resulted in the first part of a work titled ‘Phénoménologie et matérialisme dialectique’ (1951). Van Breda gave copies of transcriptions to Tran Duc Thao as well as Paul Ricoeur, who first visited Leuven in January 1947.

From beginning on Van Breda concentrated on promoting the Husserl-Archives in Leuven as an institution active on the international stage. Van Breda did not want to restrict the Husserl-Archives to the exclusive study of Husserl’s theories. Rather, he envisaged it as a research center in which phenomenology’s various branches could find a home. He related his plans to Malvine Husserl in April 1947, writing:

“Perhaps one day, Leuven will become a center for all the major phenomenologists from around the world, where they will come, stimulated by Husserl’s thought, in order to continue their work in his spirit. You may say that this is a mere pipe dream, but perhaps such dreams are needed to keep people from giving up. After all, much of what has already been accomplished could only be considered a dream just a few years ago.”