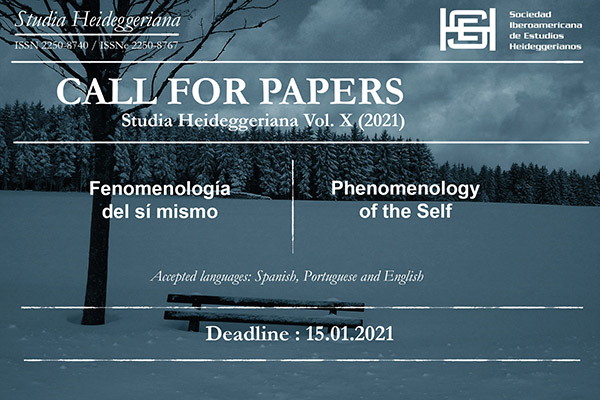 Phenomenology of the self

Studia Heideggeriana wants to dedicate the thematic section of volume X (2021) to the Heideggerian concept of the Self, and cordially invites all interested authors to submit papers on the subject. The accepted languages ​​are Spanish, Portuguese and English.

It is well known that Heidegger gives a central role to the notion of the "Self" (Selbst) in Sein und Zeit, not without rigorously  criticizing the subjectivist assumptions from which this notion has tended to be considered by the philosophical tradition. It is also quite clear to connoisseurs that this thinker is fully aware of the philosophical relevance of the Self from early on, to such extent that during the period of the early lessons of Freiburg, phenomenology is even characterized in its central nucleus as “Phenomenology of the Self ”(. However, is there only one conception of Being-one’s-Self in Heidegger? What is the relation between the conception of Being-one’s-Self and the task of philosophical self-clarification characteristic of Heidegger's thought? In what sense should we understand the famous statement of Sein und Zeit that "immediately and regularly we are not ourselves"? What is the relevance of the modalities of authenticity and inauthenticity in this regard? Is this conception substantially modified with Heidegger's internal transformation of thought from the 1930s on? These, perhaps, are some of the multiple questions that the Heideggerian treatment of the Selbst could continue to raise. Undoubtedly, the original Heideggerian conception of the Self makes it a philosophical source of great power when addressing current problems such as that of self-knowledge and self-deception, criticism of the primacy of consciousness and the phenomenon of self-determination, personal and practical identity, first person perspective and the referential character of the "I".

The journal also accepts free submissions, not related to the topic of the issue, for its Varia section, and reviews of recently published books.

Back to Open Call for Papers